I'm all about trying new things these days: new ingredients, new techniques, etc. I don't think I've ever cooked a mollusk before. Truth be told, I honestly didn't realize that mussels were alive when you bought them. While storing them in the fridge before cooking, half of them opened up. Which I knew was bad. Opened mussels = bad mussels. However! After running them under cold water, they all closed up again! It was kind of gross, kind of cool. I guess I'll have to deal with it if I ever intend to cook a live lobster (I want to try it, but I SO DO NOT at the same time). Anyways, keep them cool and rinse and scrub them before you proceed with the recipe. Toss any that stay open.

Regardless of your experience with mollusks, you should definitely try out this recipe. It's super delicious and makes for a great dinner party dish. Here's what you'll need:

Read more »
Posted by chipplec at 7:05 PM No comments:

After watching Julie & Julia while spending a weekend away in the Catskills last weekend, I was inspired to take my new Le Creuset dutch oven for a spin and make an attempt at Julia Child's Beef ("boeuf" if you're fancy and/or French) Bourguignon. I was going to actually go out about buy her cookbook, but it was too wordy and daunting, so the recipe below is compiled from different variations I found online (most of which were very confusing). Keep in mind this thing takes around 5 hours start-to-finish, though you're only active for about an hour of that time. Great for a lazy, rainy day. Here's what you'll need:

Read more »
Posted by chipplec at 4:43 PM No comments: 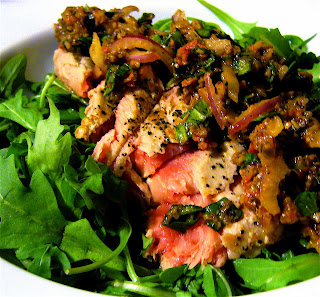 I think the title of this post takes longer to say than the actual meal takes to prepare. As work continues to kick into full gear now that summer has past and the early sunsets make for less ambitious evenings, I'm really growing to appreciate meals that take more time to eat than to make. Tonight was another one of those. I found a recipe that sounded tasty, but complicated (they made the tapenade from scratch), but like most meals on this site, I simplified without sacrificing taste. Here's what you'll need:


So I began by purchasing a pre-made olive tapenade. My local market had several varieties: black, green, kalamata, mixed, etc. I went with the mixed, which also had roasted red peppers, sundried tomatoes, garlic and salt mixed in. I didn't object to any of those things, so I rolled with it.

Mix the tapenade together with the onion, basil, oil and vinegar. Add salt and pepper to taste (and if necessary - I didn't add salt since there was already some in the tapenade). Set aside.

Heat a non-stick skillet over medium-high heat. Rub oil, salt and pepper on each side of your tuna steak and toss on the skillet. I like my tuna steaks medium-rare, so I only cooked about 2-3 minutes per side. Let the steak cool for just a minute before slicing.

Add the tuna slices over a bed of arugula and top with the olive tapenade. Voila - seriously delicious meal in under 10 minutes. 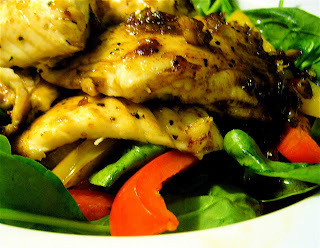 So I know a lot of my recipes have an emphasis on red meat and carbs (I can't help it!) However, every once in awhile I like to kick back with some fish and leafy greens. The recipe below is for an awesome little salad that only uses one pan - great taste AND easy clean-up. It doesn't get better than that. Here's what you'll need:
Rinse the fish and pat dry with a paper towel. Then cut the fish into 4 serving-sized pieces and set aside. Place the spinach in a large bowl and set aside. In a large skillet, cook the onion in 1 tablespoon of the oil over medium heat for 5-6 minutes, or until tender and slightly golden. Add the sweet pepper, cook and stir 1 minute more. Remove from heat. Stir the onion mixture into spinach; transfer to a serving platter and set aside.

Meanwhile, sprinkle the fish fillets with 1/8 teaspoon of salt and 1/8 teaspoon of black pepper. In same large skillet, heat the remaining 2 tablespoons of oil over medium-high heat. Add the fish and cook for 4 minutes. Carefully turn fish. Reduce the heat to medium; cook 3 minutes more or until fish flakes easily when tested with a fork. Place the fish fillets on top of wilted spinach and cover to keep warm.

In a small bowl, stir together the balsamic vinegar and honey. Add to the same large skillet. Cook and stir until heated through, scraping up any browned bits. To serve, spoon the balsamic vinaigrette over the fish and spinach. Makes 2-4 salads, depending on the appetites at hand.

I've featured different kinds of pizza on the blog several times, but I've never tried a basic margherita. The recipe I tried is a variation of one I found. It includes a nice kick with the addition of the red pepper. And it's super quick and easy, which is always nice. You could also probably use this recipe to cheat a really simple pasta sauce! Here's what you'll need:

Read more »
Posted by chipplec at 1:17 PM No comments: 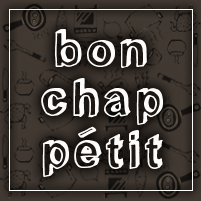 Happy Sunday Bon Chappers! ("Bon Chappers" - do we like that? Have any better suggestions? Leave it in the comments!)

Just a friendly reminder that if you're a fan of the blog, be sure to like me on Facebook. In addition to staying up-to-date with original recipes, I also re-post past recipes from the blog archives, new variations to old favorites and helpful cooking tips from around the web. 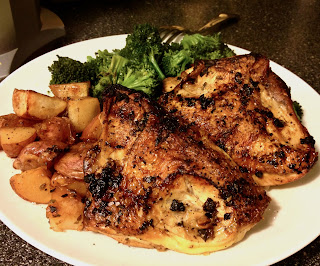 After all of the fish and healthy vegetables I've been consuming lately, I was in the mood for something hearty, something with potatoes. Something completely not that healthy! I'd never made roast chicken before, nor have I ever made it with the skin on. I can safely say, it will not be my last. This was delicious. Here's what you'll need: 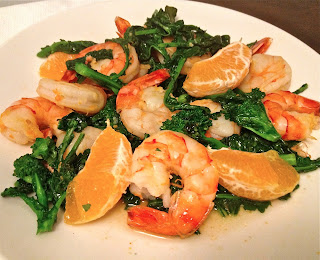 I came across this recipe on nytimes.com. It was a little outside of my comfort zone - being that I've never liked broccoli rabe in the past - but decided to try it anyways. Maybe I'm a glutton for punishment? Well not this time. It was actually pretty great, and super quick and easy. And guess what? I liked the rabe! Is there supposed to be an accent on that: rabé? Whatever, let's get to it.

Read more »
Posted by chipplec at 9:29 PM No comments: 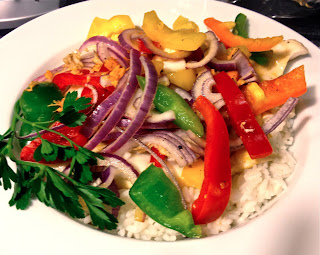 I love a good 20/20 experience, and I'm not just talking about the new JT album (which I also love, for the record. Except for that song about Jessica Biel being a drug dealer. That's odd. Catchy, but odd). No, my 20/20 experience is a meal that's under $20 and 20 minutes. If it's great tasting (and this one is!), then it just doesn't get any better. Here's what you'll need: 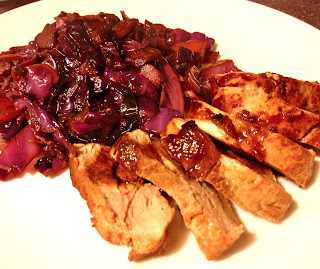 And I don't even like beer! Apparently it makes a good marinade though. I had my doubts about this one. I won't lie, it didn't have the greatest smell when I first put together the marinade. The flavors came together in the end though, especially the cabbage. I've never made cabbage before, but after tonight, I think it'll definitely become a regular side dish. Here's what you'll need:

Place the pork in a large resealable plastic bag. Whisk the lager, soy sauce, brown sugar, and 1 tablespoon vinegar in a small bowl and pour into the bag with pork and seal. Chill, turning occasionally, for at least 4 and up to 24 hours.

Preheat oven your to 400°F. Heat the oil in a large skillet over medium-high heat. Remove the pork from marinade, allowing any excess to drip off (reserve marinade). Cook the pork, turning until browned on all sides, 8-10 minutes.

Transfer the pork to the oven and roast until an instant-read thermometer inserted into thickest part of pork registers 140°F, 10-15 minutes. I just tossed it on a cookie sheet, but if you have an oven-safe skillet, you can probably just toss that in there. When done, transfer the pork to a plate and let rest for at least 10 minutes.

Pour the reserved marinade into a small saucepan. Bring to a boil, reduce heat, and simmer until slightly thickened, 5-10 minutes.

Meanwhile, melt butter in a large skillet over medium heat (I used the same one that I'd browned the pork in.) Add the cabbage, apple, and 1 cup of water and season with salt and pepper. Cook, tossing occasionally, until the cabbage is softened, 15-20 minutes. Add remaining 1 teaspoon vinegar and toss to combine.

Slice pork and serve with cabbage mixture and sauce.

Posted by chipplec at 9:30 AM No comments:

chipplec
New York, NY
Welcome to Bon Chappétit! Here you'll find recipes that I've tried myself. They're all deceivingly easy to make and insanely delicious to eat. Try none, some or all. I'd love to know what you think...